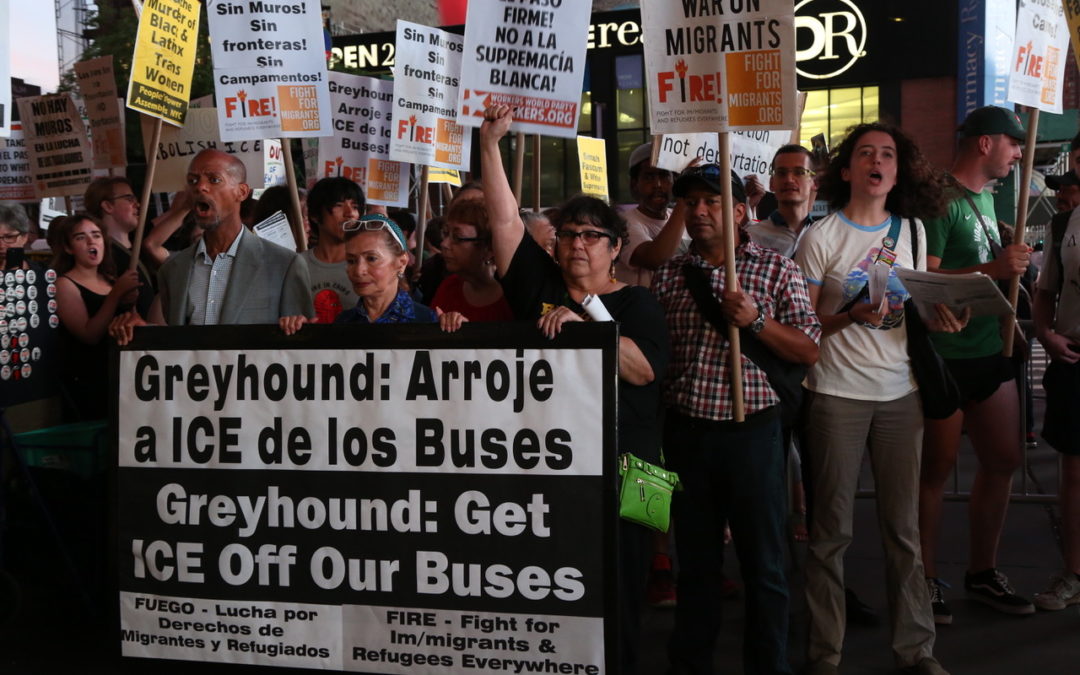 About 200 demonstrators gathered Aug. 23 outside Manhattan’s Port Authority Bus Terminal, demanding an end to collaboration between Greyhound Lines, Inc. and Customs and Border Patrol agents, who have been illegally boarding buses to racially profile and detain migrants. The protest was the result of a month of planning by a coalition of migrant, anti-racist and union organizers.

Demonstrators held a speakout where migrant organizers described the effects of oppressive Immigration and Customs Enforcement and CBP policies. The demonstration quickly drew a crowd of hundreds of sympathetic onlookers.

“Know-your-rights” information was passed out. The protest ended with activists marching inside the terminal and chanting “ICE off our buses” in front of the Greyhound’s ticket station — which the New York Police Department rushed to block off.

Under the Trump administration, CBP has increased public transportation dragnets. In violation of the U.S. Constitution, CBP agents have been boarding buses and demanding passengers provide proof of citizenship. Agents make no efforts to obscure the fact that their police-state tactics are laser-focused on anyone who looks Latinx.

The American Civil Liberties Union has argued that these searches lack probable cause and are therefore a violation of passengers’ Fourth Amendment rights. Greyhound has the right to deny CBP agents entry to their buses, but the corporation has repeatedly refused to do so. With total disregard for the safety of their passengers, Greyhound has put the onus on passengers to know their rights and has passed the buck to lawmakers to address the problem.

However, what appears on the surface to be cowardice is actually just another demonstration of the close relationship among capitalists, politicians and armed state agents. Law enforcement exists to protect the wealth of the capitalist class. Companies like Greyhound have no interest in impeding or offending their armed henchmen.

Over the last two decades, the capitalist class has funded and encouraged the increased militarization of local and federal police agencies because they depend on law enforcement crackdowns to suppress the growing surge of working-class outrage.

Don’t be fooled by Greyhound’s claims of powerlessness. Business and fascists have always worked, and always will work, hand-in-hand.

In July organizers put out the call for a mass action challenging Greyhound, ICE, CBP, and the larger detention and deportation machine. Fight for Im/migrants and Refugees Everywhere (FIRE), the Laundry Workers Center, and People’s Power Assemblies coalesced to build a series of actions aimed at abolishing ICE and closing the border concentration camps.

Activists from all over New York City and northern New Jersey attended planning meetings, made contacts with the press and connected with transportation union members.

The result was a rally that drew a large cross section of the working class — both migrants and their allies. Commuters who were previously unaware of the demonstration showed solidarity by accepting literature and holding signs.

Even the capitalist press was compelled to provide positive coverage. This success shows the advantages of patient coalition work.

Where organizers go from here has yet to be determined. Demonstrators put out a call for followup meetings. The masses’ disgust and rage at ICE, CBP and their corporate collaborators has certainly not abated.

What we can say for sure is that this action represents a strategic shift as organizers target ICE and CBP logistics and seek to make it untenable — if not impossible — to deport and detain human beings. If that trajectory continues over the longterm, there is the potential for building enough mass pressure to seriously immobilize the detention and deportation machine.

Both the Trump regime and the Democrats are unwilling to cede to the demands of the people. So we will have to make changes ourselves.