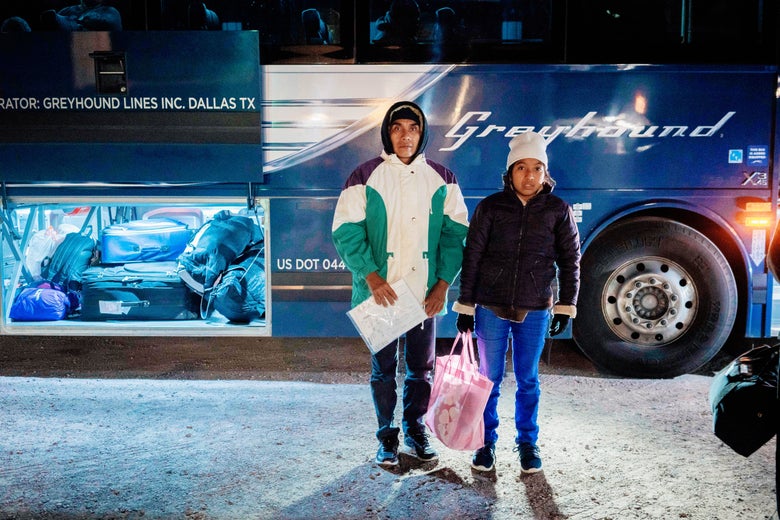 Two years ago, Andres Sosa Segura was traveling by Greyhound to return home to his wife and four children in Underwood, Washington, from a job in Montana when Customs and Border Protection agents stopped him during a transfer at the Spokane Greyhound station. Sosa, whose wife and children are American citizens, was “the only Latino appearing passenger on his bus” when he was cornered by CBP, according to a federal lawsuit he filed in June. Sosa handed the agents a card that invoked his right to an attorney, declined to consent to a search, explained that he had already been released by a court to await immigration proceedings, and showed them an ankle monitor as proof.

The Border Patrol agents detained Sosa anyway and, according to the lawsuit, told him that his assertion of his rights was proof that he was “illegal.” Sosa claims he was held for four hours before being released, causing him to miss the last bus of the day. His wife had to make the five-hour drive to Spokane to pick up her husband.

“Border Patrol was racially profiling him, assumed he was illegal because he was asserting his rights, detained him unnecessarily for hours despite the clear evidence that there was no reason to do so,” ACLU of Washington attorney Lisa Nowlin, who represents Sosa, told me.

Sosa’s story is not uncommon for Greyhound passengers. Earlier this year, comedian Mohanad Elshieky, an asylee originally from Libya, was taken off of a Greyhound bus and detained by CBP agents who allegedly told him that his papers were “fake” and that he was “illegal.”

At the time, Elshieky had a pointed message for Greyhound: “[F]uck you @GreyhoundBus. You could have easily not let those agents on the bus.”

The union argues that keeping agents off buses as much as possible is also the best way to keep bus drivers and their passengers safe.

Civil rights advocates agree with Elshieky that Greyhound does not have to subject its passengers to racial profiling and harassment by border agents if they don’t provide a warrant or probable cause. The ACLU sent a letter in July calling on Greyhound’s parent company to assert its Fourth Amendment right against unreasonable search and seizure. The company could simply provide its bus drivers with a laminated card that they could hand to CBP agents—as Sosa had done.

Greyhound, however, thinks this will put its bus drivers in unnecessary danger. On Aug. 1, Greyhound’s British parent company FirstGroup PLC responded to the ACLU stating that it believes the company “does not have the 4th Amendment right” and that requesting probable cause from a CBP agent attempting to initiate a search would “put our drivers’ safety or the safety of our passengers at risk.”

Greyhound’s drivers disagree, according to the union that represents them.

“The Amalgamated Transit Union supports the ACLU’s call for Greyhound to prohibit Customs and Border Patrol agents from boarding buses, questioning passengers, or searching their belongings without warrant or probable cause,” Amalgamated Transit Union president John Costa told Slate in a statement on Tuesday. “The ATU believes that Greyhound is about transportation, not about harassment and racial profiling of passengers, regardless of their immigration status.”

The union argues that keeping agents off buses as much as possible is also the best way to keep bus drivers and their passengers safe. “Our objective is to assure Greyhound remains a safe mode of transportation for our passengers and drivers,” Costa said.

FirstGroup claims that, as a regulated commercial carrier, it is obligated to let CBP agents on board its buses under a provision of immigration law that allows for immigration searches of vehicles within a reasonable distance of the border. The Supreme Court, though, ruled in 1973 that under the provision of the Immigration and Nationality Act in question, CBP could not randomly stop a private vehicle without probable cause. Those types of searches, the court ruled, had to be conducted at established checkpoints. But Greyhound claims that as a bus company, it doesn’t have the same rights as private drivers to say no to the searches, and so it won’t bother to try.

“This isn’t so much a legal argument, but more so a lack of willingness to change their policy based on potential political ramifications that they may face from the [Trump] administration,” said Luis Nolasco, a community engagement and policy advocate from the ACLU of SoCal, which has filed a legal claim in a case where a Latino passenger was taken out of line while boarding a Greyhound bus and arrested because “his shoes looked suspicious.”

For its part, FirstGroup says it opposes the searches and wants Congress to change the law. “We are in full agreement with you that harassment and racial profiling of people of [color] is completely unacceptable in any context,” FirstGroup wrote in its letter to the ACLU.

In response to Slate’s questions, a spokesperson for FirstGroup said:

We do not ‘consent’ or ‘allow’ to searches by CBP of passengers of any age; we do not have a say in the matter. … [W]e [don’t] want to put our drivers’ safety or the safety of our passengers at risk by attempting to stop a federal agent from conducting checks. We are required by federal law to comply with the requests of federal agents. To suggest we have lawful choice in the matter is tendentious and false. We certainly do not agree with the law as it stands, or how it is implemented, which is why we are calling on Congress to change the law and encourage our customers to do likewise.

Greyhound’s argument is that, as a federally regulated industry, it must comply with immigration searches without question.

This does not hold up to scrutiny. As the ACLU notes, courts have repeatedly held that the closely regulated industry exception to the Fourth Amendment, which Greyhound cites, requires a legitimate and specific regulatory purpose “and may not be used for general law enforcement.”

“By analogy, a Department of Transportation safety officer might not need probable cause or consent to inspect a bus for safety violations, but that does not give Border Patrol an unlimited right to board buses for the avowed purpose of general immigration enforcement under the pretext of vehicle safety inspections,” David Loy, legal director of the ACLU of San Diego, said.

The company’s continued refusal to assert its rights on its buses could soon put it in direct conflict with state law enforcement officials.

Washington attorney general Bob Ferguson has warned the company that its decision to leave its customers susceptible to these searches may violate Washington’s consumer protection and anti-discrimination laws.

“Greyhound’s practice of voluntarily permitting CBP agents to board buses for the purpose of conducting immigration checks appears to infringe on passengers’ rights in a place of public accommodation on the basis of race or national origin,” Ferguson wrote in a letter in February.

Ferguson subsequently made six demands of the company in May. His principal request was simple:

Greyhound should provide notice of Greyhound’s non-consent to CBP’s immigration sweeps via a sticker on or near the door of each bus passing through Washington. The sticker should state substantially the following: “Greyhound does not consent to non-ticketed persons boarding this bus. Law enforcement officers must have a lawful basis, such as a judicial warrant or probable cause, to board.” Greyhound could also create a laminated card for a driver to hand to any individual who attempts to board the bus without a ticket, in order to advise that person of Greyhound’s corporate position.

This is exactly what the ACLU and the bus drivers are asking the company to do. Refusing to do so, the ACLU says, makes Greyhound responsible for whatever abuses might unfold on its buses.

It’s unclear whether and how Ferguson might make good on his promise to enforce Washington law, or how the ACLU might escalate its campaign against the company. In a statement, Sylvia Ruiz, deputy director of the ACLU’s Immigrant Justice Campaigns, made clear that they will accept “no more excuses.”

“By refusing to send a letter, issue a public statement, post signs on buses, or otherwise proactively deny CBP consent to board its buses without a warrant,” Ruiz said, “Greyhound and FirstGroup have become complicit in the Trump administration’s war against immigrants.”