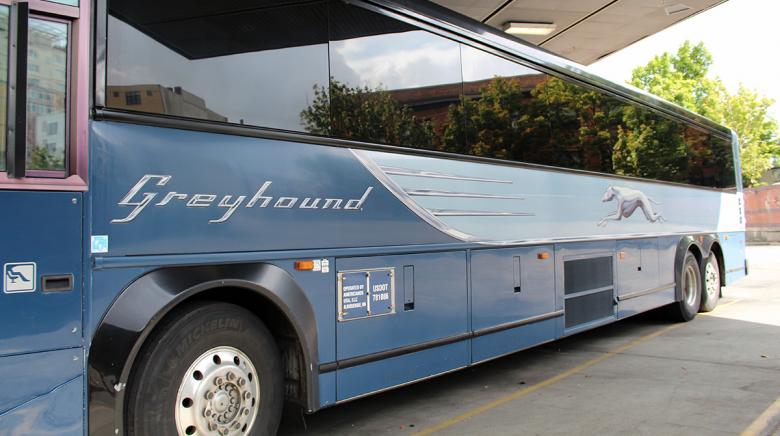 Demonstrators will rally in Portland this weekend and deliver a letter to Greyhound Lines Inc., demanding the bus company stop allowing federal immigration enforcement agents to board its vehicles in order to check passengers’ immigration statuses.

But whether Greyhound has any choice in the matter is unclear, with Greyhound and federal agencies saying the law dictates the company must allow these checks and activists and the American Civil Liberties Union saying Greyhound has the right to keep federal agents off its buses unless they have a warrant.

Protesters also plan to distribute “know your rights” leaflets to passengers, informing them they have the right to not answer questions about their immigration status without legal counsel and the right to refuse a search of their belongings.

The rally will take place at 2 p.m. Saturday, Sept. 21, at Greyhound’s new loading zone at Northwest Station Way, between Lovejoy and Marshal Streets in Portland’s Old Town neighborhood. It is part of a nationwide, coordinated series of protests taking place this month and last aimed at challenging the Trump administration’s deportation and immigrant detention practices.

Fight for Im/migrants and Refugees Everywhere, or FIRE, and International Workers Solidarity Network, or IWSN, initially put out the call for action and led a protest that drew about 200 demonstrators to Manhattan’s Port Authority Bus Terminal on Aug. 23. Protests are also occurring in Houston, Austin, Atlanta, Buffalo, Philadelphia and Boston.

The number of rail and bus passengers being stopped, questioned and detained in the northern United States for immigration enforcement purposes has increased since 2017, according to an NBC News report in June. The increase follows the reversal of an Obama-era policy that restricted the approval of such searches.

Locally, the Portland chapter of Workers World Party, with the endorsement of several other area groups including Occupy ICE, Portland Central American Solidarity Committee and International League of Peoples’ Struggle PDX, is organizing the demonstration and inviting members of the public to join.

“Donald Trump’s immigration policy is racist terror, blatant cruelty and creates social divisions that can only be characterized as white supremacy. We are fighting for unity among workers and immigrants everywhere,” said local Workers World Party organizer Lyn Neeley.

On the national level, the Amalgamated Transit Union, which represents Greyhound bus drivers, has publicly announced its support of the ACLU’s effort to pressure Greyhound into ceasing its cooperation with immigration status checks on the buses its drivers operate.

In a statement, however, Greyhound told Street Roots that because it’s a regulated carrier, it “is required to comply with the requests of federal agents.”

It said Border Patrol searches of its buses have “negatively impacted its customers and operation,” and therefore it’s calling on Congress to change the law requiring its compliance.

“We also encourage all our customers to know their rights and share their opinions on this important issue with their members of Congress,” the company stated.

Greyhound provides bilingual know-your-rights information at its terminals and online so passengers know their options if confronted by immigration officials during their travels.

But the ACLU disagrees with Greyhound’s interpretation of the law, arguing the company does have the right to refuse entry to Border Patrol agents under the Fourth Amendment of the Constitution, which protects against unreasonable search and seizure.

While the national branch of ACLU did not reply to our requests for comment, ACLU of Oregon’s immigration rights attorney, Leland Baxter-Neal, said he does not believe it has changed its position since receiving the letter.

“Greyhound buses has the right to protect its clients and their Fourth Amendment right and to require Customs and Border Protection to produce a warrant before they enter the bus,” Baxter-Neal said.

He said Border Patrol, which is an arm of U.S. Customs and Border Protection, shouldn’t be searching buses for undocumented immigrants because it’s problematic.

“The concern is that folks who may be citizens and in the eyes of a CBP officer don’t quote-unquote ‘look American enough’ might be subject to scrutiny, to harassment, just like we saw with (Mohanad) Elshieky from Portland.”

Elshieky, a stand-up comedian, made national headlines in January after Border Patrol agents pulled him off a bus in Spokane, Wash., that was bound for Portland. The agents challenged the documentation he produced when questioned, even though he is in the country legally.

“The other concern,” Baxter-Neal said, “is that (agents) may be walking down the bus picking people based on their looks and asking those individuals whether they have papers, which is just straight-up racial profiling. So the practice is deeply concerning, and the fact that Greyhound lets it happen rather than protect its loyal customers is also deeply troubling, and that’s why the ACLU has reached out and asked them to change their practice.”

In accordance with requirements attached to federal Title VI funding Greyhound receives, it’s adopted a policy protecting its passengers from discrimination based on race, color or national origin.

Baxter-Neal argues its cooperation with Border Patrol violates its own policy. “Not only that,” he said, “it also seems like pretty bad business to be exposing your loyal customers to racialized harassment at the hand of an out of control agency like CBP.”

When Street Roots inquired with Border Patrol, an agency spokesperson pointed to the 1965 Immigration and Nationality Act, stating it gives agents the authority to board, without a warrant, any railcar, aircraft, conveyance or vehicle within 100 miles of the border in order to question individuals and make arrests.

These actions, according to the act, are supposed to be for the purpose of preventing illegal entry into the United States – that’s why they’re supposed to take place near a border. However, it seems unlikely that an individual boarding a bus in Spokane or Seattle, Wash., just crossed into the country illegally from Canada.

While these cities are, just barely, within 100 miles of the U.S. border, the state of Oregon is not. For this reason, Border Patrol does not perform bus checks in Oregon, said the agency’s regional spokesperson Jason Givens.

Givens did not answer a question about how many people his agency has detained nationally as a result of Greyhound bus searches.

“Greyhound corporation should join the ACLU in a suit against ICE and the Border Patrol to stop these unlawful interrogations, arrests and incarcerations of innocent people,” said Portland protest organizer Johnnie Lewis. “Regardless of what they say, Greyhound has the right to say no.”

While much of the rhetoric surrounding the anti-immigration enforcement demonstrations has focused on U.S. Immigration and Customs Enforcement, or ICE, with many promotional materials and signs bearing the slogan “Keep ICE off Greyhound buses,” ICE is not the agency responsible for conducting bus checks.

ICE’s regional spokesperson, Tanya Roman, told Street Roots in an email that her agency “does not board Greyhound buses in order to check the immigration status of patrons on board. Any suggestion to the contrary is irresponsible, speculative and inaccurate.”

Her statement aligns with what the ACLU of Oregon understands about the bus checks.

“I have not heard about this being an issue with ICE, as it is with Customs and Border Protection,” Baxter-Neal said. “We know this is a tactic specifically that CBP uses to target and racially profile individuals on buses.”

For more information about the demonstration on Sept. 21, visit Facebook.com/wwppdx.

Street Roots is an award-winning, nonprofit, weekly newspaper focusing on economic, environmental and social justice issues. Our newspaper is sold in Portland, Oregon, by people experiencing homelessness and/or extreme poverty as means of earning an income with dignity.  Learn more about Street Roots. Support your community newspaper by making a one-time or recurring gift today.