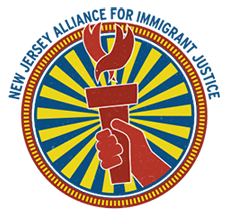 There’s no independence without an end to detention and incarceration. On the day before our country celebrates Independence Day, we gather in front of the Elizabeth Detention Center to demand a release of all detainees to their communities and an end to the carceral state. No one can be free until we are all free. we demand  #FreeThemAll and #FreeEDC.

Jails and prisons have seen major COVID-19 outbreaks even in areas where the virus is not spreading as sharply in the general population.  Detainees at the privately-run Elizabeth Detention Center have spoken out about the dangerous conditions at the private ICE immigration facility operated by CoreCivic. Detainees recently joined a lawsuit seeking the immediate release of people detained at EDC or, in the alternative, expedited bail hearings. The lawsuit also seeks to stop ICE from admitting new people into EDC and from unilaterally transferring people from EDC to other immigration jails and prisons around the country